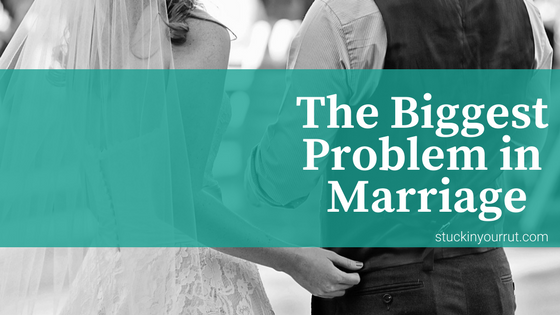 There are a lot of problems in marriages today. You can notice it everywhere you look. Many couples are divorced or in the process of getting divorced. Or, there are unhappy couples that remain married but prefer to spend their time apart. There are a lot of “reasons” that you hear for why problems start in marriage, but I think it all boils down to just one problem.

If you do a little research or talk to divorced couples you will hear the following as common problems in marriage that lead to divorce:

All of these are real problems that marriages face. If you are married you will face problems in your marriage. Some might be bigger and others smaller, but there is no such thing as a perfect marriage.

The things listed above may be the reasons that couples give for why they are having problems I don’t believe they are the real issue.

What is the real problem?

I believe the real issue behind marital problems is selfishness. We don’t get what we want so there is going to be a problem. Let’s apply it to the situations below:

We are all selfish people

There are very few people that don’t deal with being selfish. I once read a book that talked about the issues of selfishness in relationships. I believe it was Sacred Marriage: What If God Designed Marriage to Make Us Holy More Than to Make Us Happy? (affiliate link) The book takes some concepts to the extreme but makes some great points. It mentions that anytime you start thinking about how selfish your spouse is you are actually being selfish too because you aren’t getting what you want.

Selfishness is simply defined on dictionary.com as “concerned primarily with one’s own interests, benefits, welfare, etc., regardless of others.” It sounds horrible. We don’t want to admit we are selfish, but we are.

One trick we use to justify our selfishness is believing that we “know what’s best” in a situation. Then we don’t feel like we are being selfish because really we are just doing what is best for everyone in the situation. But, what happens when what we think is best isn’t the same as what our spouse thinks is best? We get in a fight and defend our own opinions because we are more concerned with our own opinions than those of spouse. It’s selfish.

Next time you are thinking about a problem in your marriage ask yourself what the underlying problem is. Some problems in marriage aren’t due to your own selfishness, but those of your spouse. The problem is you can’t control what your spouse does. They might not be aware of their selfishness, but remember that it isn’t your job to make them aware. It’s your job to focus on yourself in marriage. Make sure you are doing your part. If you focus on being an unselfish and loving wife you just might notice some positive changes from your husband as well.

Search Stuck in Your Rut