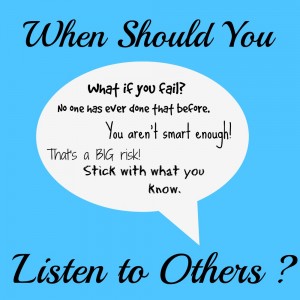 They might even disguise these negative statements into conversations that sound like they are trying to watch out for you or protect you. They are just giving you their advice because “they would hate to see you fail”, when in reality they are a stumbling block to you even trying to succeed.

The truth is, we need to be careful about who we are looking to for advice and who we are listening to. When you are trying to make a change in your life, whether it is a personal change or career change, just about everyone that you talk to will have an opinion to share with you.

When someone is making suggestions or giving you advice consider the following:

Does this person have experience in what they are sharing with you? When Dustin and I reached the point of quitting our full-time jobs to grow our cleaning business there were several people we knew who had opinions they wanted to share and advise they wanted to give us. We were making this change in 2010 when the economy was down. There weren’t a lot of jobs out there and we would be giving ours up. We heard a lot of reasons about why we should not be starting a business in a downed economy, but the people giving us these reasons had no experience in owning a business. From our previous experiences we had learned to take this into consideration when listening to advice from others.

If someone is in the same place you are in life and you are trying to make a change, they might not have the best advice to offer because they have not stepped out of where you are. If you are trying to quit smoking, you don’t want to listen to the advice of someone who is a smoker. You would want to speak with someone who has already been successful at quitting. If you are considering starting a new business, or wanting to start an Etsy store, the best person to get advice from is someone who has already taken the step and been successful.

Getting advice from inexperienced people or people unsuccessful in what you want to accomplish will only serve to discourage you or help keep you stuck where you are.

What is the state of this person’s personal and career life?

If the person that is giving you advice does not have personal experience in the exact area that you are working on, then it’s important to look at where they are in their life. They might not have done exactly what you are trying to do, but have they succeeded in similar situations? Are they a positive person who makes a differences in those around them?

In his book, The 15 Invaluable Laws of Growth, John Maxwell talks about Sue Enquist, who retired as one of “the top five NCAA coaches of all time”. He says:

“Enquist has espoused the 33 Percent Rule. She says you can divide people in school, on your team, at work, or anywhere else into the bottom, middle, and top thirds, and they always have the same characteristics: The bottom third suck the life out of you because nothing is ever good enough for them. They take energy and motivation out of an environment. The middle third are happy and positive when things are going well, but down in times of adversity. Circumstances dictate their attitude. The top third maintains a positive attitude even in tough times. They are leaders, influencers, and game-changers. Those are the kind of people we should try to be and those are the kind of people we should spend our time with.

Ask yourself, which of the three groups does this person fall into?

Are they really trying to help me? Let’s face it, most people naturally focus on themselves and what they can understand. If someone has not stepped out to try new things in their life and they are giving you advice, chances are they aren’t trying to help you as much as they are trying to make themselves feel better for not making an effort in their own life.

I think parents often fall into this category. Parents have a way of acting like they only want what’s best for you, but they end up discouraging you from stepping out into something new, because they are afraid since they don’t know what the end results will be.

Susan Biali, MD in her article, 8 Mistakes That Hold You Back From the Life You Want, says, “Whenever you change your own status quo – or even contemplate it – this brings up everyone else’s stuff (a.k.a. fears). Many people will get a strange sort of satisfaction in telling you why something won’t work, and will happily tell you about someone else who tried and failed spectacularly. Most worthwhile changes involve some sort of risk, and others will have failed trying. You could well be the one who succeeds. The only way to find out is to try.”

If possible, find a mentor. John Maxwell teaches that a good mentor:

So, what now? There will be people out there who are genuinely trying to help you and offer you legitimate advice. Your job along the way to making changes in your life is to distinguish who those people are. Don’t stay stuck in life because you are listening to people you shouldn’t be.

And, remember, that there is one place you can always turn for advice, the Bible. Dustin and I were just discussing the other day, how amazing it is that you can find advice and direction on everything within the Bible. Even though it was written so long ago, it still applies.

Search Stuck in Your Rut