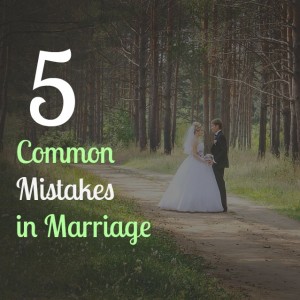 “And they lived happily ever after…” We have all read the stories that end like this and if you’re like most people this is the way you hope your life story will go. However, if you are like most people, you have learned that real life doesn’t go like we plan.

Four years ago my marriage fell apart. I was an awful wife; my husband couldn’t honestly say he had been a great husband, life as we knew it was over. We had gone wrong in so many places and had so much to learn. A lot of couples would have thrown in the towel and ended it, but with God’s grace we stuck it out and pushed through.

We began to study ourselves and study marriage like never before. We read and learned and applied the things we learned. From my reading and studying, I saw there are a million places where you can go wrong in marriage. The real way to have a good marriage is to know going into it that it is going to be a lifetime of work, and sometimes the hardest work you have ever done; but, in the end it will all be worth it.

Here are 5 common mistakes that couples make in marriage and how to avoid them.

1. Expecting Your Spouse to be a Mind Reader.

This was a big problem in our marriage and it went both ways. I never wanted to tell Dustin what I wanted from him. I figured that if I told him what I thought he should be doing for me then it wouldn’t mean very much if he did it. I wanted him to have to figure it out on his own because it would mean more to me. But, what ended up happening is that he had no idea what I wanted and so he ended up missing the mark constantly. I needed to tell him what I wanted and then appreciate if he was willing to do it for me.

On the flip side, my husband did not compliment me very often. There were many areas that I felt insecure in that I would have loved for him to build me up in, but it just didn’t seem to happen. When we finally started communicating well and I explained this to him he was confused. He thought he had been doing a good job in this area. After some focused thinking, he realized that he had been thinking compliments about me, but not verbalizing them to me.

Your spouse is not a mind reader and they never will be. If you want something from them, give them a fair shot and tell them what it is. If you think something nice about them, tell them or write them a note. Everyone loves compliments and everyone wants their spouse to appreciate them, but they will never know if you don’t tell them.

This was another struggle that we faced in our marriage on both sides. My mother-in-law is a fantastic lady, but she is a “mommy”. She is so loving and comforting and loves to spoil everyone in her family. My husband is the oldest of 4 boys and the first to get married. My mother-in-law had a hard time adjusting to being the parent to a married grown-up child. She called multiple times a day to speak to my husband and wanted to be part of everything in our lives. I thought it was just her until my friends started to get married. It seemed to be a pattern with the husbands and their mothers.

I appreciate that my husband kept working with her and even being firm when he needed to be to set a new healthy standard for their relationship.

I had the opposite problem and didn’t realize it. I valued my mother’s opinion far more than I should have. I had a hard time making decisions without asking her for her advice. My house was decorated like her house, she watched my daughter, I stuck to all of my “family’s” traditions. I would value my mom’s opinion at times over my husband’s.

I wanted to stick to all of the traditions that I grew up. I am even embarrassed to admit, but we stayed the night at my parent’s house on our first married Christmas Eve so we could wake up in the morning and celebrate Christmas with my family. Now, that might not sound that bad, but we lived less than 15 minutes away. I didn’t want to lose any of those childhood traditions.

It wasn’t until I almost lost my husband that I realized that my family now was first and foremost my husband and my children. We set new traditions for our family. I kept a few that I grew up with that I wanted my children to experience, but we established a lot of new ones too.

It is so important to leave your “old” family when you form that “new” family with your spouse (and children if they come along). Ephesians 5: 31 says, “For this reason a man will leave his father and mother and be united to his wife, and the two will become one flesh.”

Life is not like the movies. Your spouse isn’t going to spend their day wooing you the rest of your life. The weight might not just melt off without a lot of work after the baby is born. Your house is not going to be sparkling clean at every moment (or maybe not even the majority of them). Life isn’t just going to be “happily ever after”.

Life is hard and marriage is even harder, toss in a kid (or two, or five) and it can be a real mess. If you set unrealistic expectations for yourself, your spouse, and your life, you will spend a lot of time disappointed.

If you don’t communicate your expectations with your spouse you have no way of knowing if they are realistic or not.

4. Not Properly Preparing for Marriage.

I wonder what heartache and tears could have been spared if I would have invested even half the time into planning my marriage as I did into planning my wedding. While “two becoming one” might be God’s design it doesn’t happen naturally because we are all selfish people. A good marriage takes work, planning, and sacrifice.

I wish that I would have spent time talking with older married women who could pass on the lessons that they learned along the way. I wish I would have not been timid and would have thought about and asked some women the tough questions or for their advice on anything I might not even think to ask about.

We thought it would be easy. We were so wrong. Once we started to really study marriage four years ago we found so many amazing resources. There were tons of Christian books on marriage, being a wife, being a husband, communication, sex, and on and on. I regret not spending hundreds of dollars before my marriage learning what it would really mean to be a wife, compared to the thousands of dollars that we spent on our wedding.

We were required to go through pre-marital counseling at our church before getting married. I think this is a great idea, but what we experienced was not enough preparation. Most of things I remember learning was either about money or the division of chores. We also learned a little about communication and the concept of repeating back what the other person says, but we were so ill prepared for the real challenges of marriage.

I know several women who wanted long (over a year) engagements because they wanted to make sure they had enough time to plan their weddings. This is not uncommon. A wedding has become a huge ordeal. Couples spend months (or years) and thousands of dollars planning for their wedding, which last for 1 day; yet they spend little or no time and money planning for their marriage.

I have already briefly talked about setting boundaries with parents during the leaving and cleaving stage, but there are many boundaries that need to be set in marriage.

Set boundaries with the opposite sex. You might think this is going too far, but I don’t. Do not be friends with someone of the opposite sex when you are married. I’m not talking about the husbands of your friends or your husband’s friends, I’m talking about having friendship with a man that is not through your husband. You might think it won’t be a problem, but I believe this is one area that you can NEVER err on the side of being too cautious. And, it is one area that your husband will never complain about you being cautious about.

Marriage is hard, but if you invest the time into it, it can be so rewarding. Have you experienced any of these marriage mistakes? What are some other common mistakes in marriage or areas to prepare for before getting married?