Sometimes it’s helpful to find a good recipe or a fun craft or project to do around home. Sometimes it’s nice to read a motivational or encouraging story. And sometimes it’s fun to just read something silly.

You know those moments you have in life that are not funny at all the moment they are happening, but after a day or a few days, or maybe even a lot of days pass, they become funny. And they become memories that your family enjoys or things that you will always be teased about. This is one of those stories.

One of my most embarrassing moments

As I have mentioned before my family enjoys taking a yearly trip to Walt Disney World. We work hard to get there and we enjoy just about every minute of being there. Well, a few years ago we had been planning on taking our trip during November, but an unexpected situation arose and we had to reschedule for December (we would be making it back home on December 23rd, right in time for Christmas). We were excited to make a special evening out of visiting Fort Wilderness (the Disney campground) where guests decorate their campsites every year for the holiday. We heard it is awesome to see! 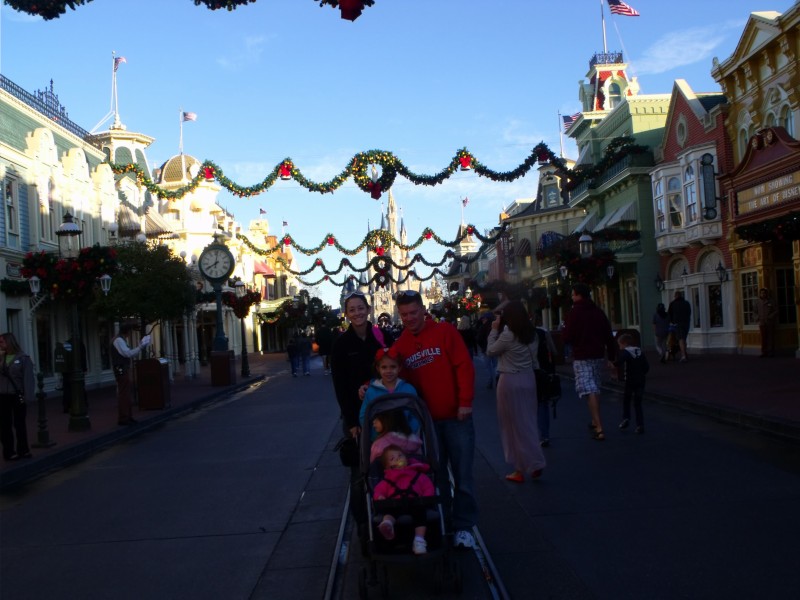 The five of us on main street. We are from Michigan and wearing coats and are cold!

Well, the first day of our trip my husband was not feeling well. After making a few phone calls he headed to an urgent care and a few hundred dollars later was given some medication to help him with a severe sinus infection. We did a little bit of resting in the room to help him recover but after that, we were good to go.

Our second to the last day of our trip we went to Animal Kingdom. In the morning we had plans for breakfast at Tusker House for Donald’s Safari breakfast. It was an amazing buffet with lots of food and plenty of refills of “Jungle Juice” which is a yummy mix of tropical juices. We enjoyed a great breakfast as a family and headed out into the park. After a few hours, I started to feel not so great. I tried to fake it for the family, but after a little bit, I told Dustin I needed to go back to our room. So we gathered up the girls and headed for the bus to take us back to the hotel.

Before breakfast – everyone is doing good.

Once we were on the bus I knew I was in trouble. You know that moment when you know you are going to be sick but you just don’t know how long you can wait? That is where I was. There was a sweet older couple who was talking to Dustin about the campground and how much fun it is to see the decorations. Dustin shared how we were planning on visiting that night. I closed my eyes and leaned my head against the back wall of the bus and prayed that everyone would just stop talking and the bus ride would be fast!

The moment my feet hit the ground when the bus stopped I grabbed our key from Dustin and ran ahead of the family back to our room. I made it just in time. I was miserable and I spent the rest of the day with my time split between sleeping and being sick. Dustin canceled the dinner reservations we had for a restaurant at another hotel and made new reservations for him and the girls at the hotel’s restaurant. Then, my amazing husband took the 3 girls (then ages 6, 3, and 1) to dinner by himself and he even took them to a campfire and Christmas tree lighting! They played on the playground and had lots of fun, while I slept. 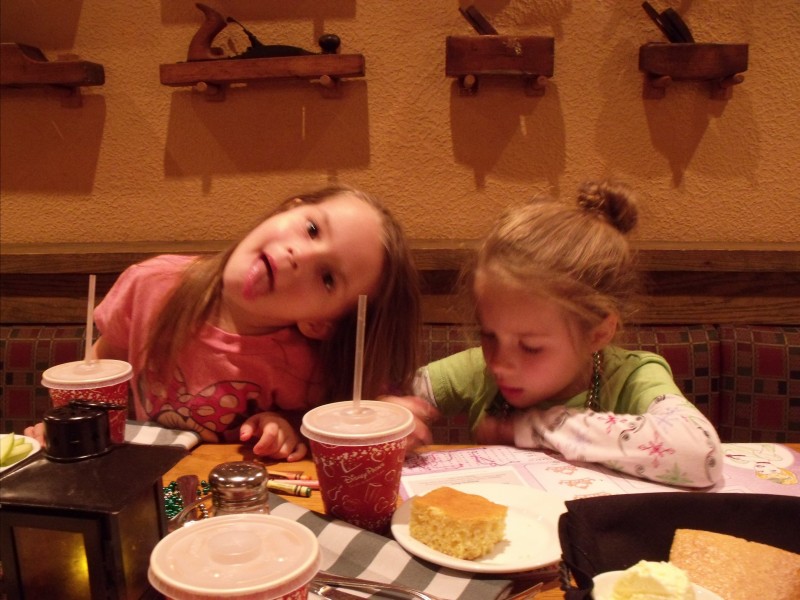 During dinner with Daddy.

Later that night when the girls were in bed Dustin and I sat right outside the hotel room. I drank Sprite and ate crackers and I started to think I must have eaten too much and made myself sick. I was starting to feel better and figured I just needed a good night of sleep.

The next morning came and it was our last day. We were going to Magic Kingdom. I was tired but didn’t want to ruin the trip for everyone so we headed into the park. We had a nice couple of hours, but the temperature had dropped almost 30 degrees overnight and we were cold! I was hanging in there, but pretty much avoided eating just to make sure I would be ok.

Then it all fell apart

My daughters were so excited to go on the Winnie the Pooh ride. We got in line and the girls played while we waited. Once we were almost to the front of the line I started to feel a little dizzy. I figured I would be good if I could just make it to the ride. The cast member told us what number spot to stand at so we could wait for our turn on the ride. And, as we were walking to the front everything started to fade out and spin!

I figured I would just lean back against the wall and be tucked out of the way of the other people. So I leaned back and slumped to the ground at about the same time everything faded away. Dustin later let me know I actually had pretty much sat down blocking the entire walkway for all the other people (oops!). I could hear Dustin and a Disney cast member ask if I needed help and I shook my head yes. I was thinking they might help me get to the Disney first aid area.

Well, next thing I remember I can hear someone talking to me who was from the fire department. I couldn’t believe it! If I had felt any better I would have been so extremely embarrassed, but I felt too sick to care at the moment. I had just been hoping for someone to help me get to the medical building or something like that, but was not hoping for that much help. Well, after they checked me out they figured I had probably been hit with a 24 hour flu that had been in the area. I was dehydrated but ok. I could hear my 3 year old asking my husband over and over again when we were going to go on the ride. He nicely explained that mommy was sick and we weren’t going to be able to go.

So they loaded me up in a wheelchair and took me back to the bus. I kept my eyes closed for most of the time, but realized when we were leaving the ride that because of me they actually had to shut down the Winnie the Pooh ride!! As in, make everyone waiting in line get out of line and go somewhere else! I am mortified, even now, to think about that. Dustin loves to remind me that I probably ruined some children’s Disney experience by not allowing them to have a turn on the Winnie the Pooh ride.

Our girls were disappointed and our oldest was worried (she is a big worrier) but the Disney workers were amazing and as they were wheeling me out of the ride through the gift shop, they gave our girls free stuffed animals! They also refunded us our tickets so we were able to use them on our next trip.

We rested in our hotel room for the rest of the day until our dinner reservations that we attended at Chef Mickey’s. I ate rice and a roll while my family enjoyed a large buffet and lots of fun Disney characters! 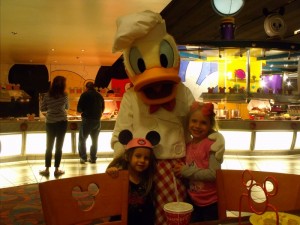 The youngest, not so much…

Now my husband loves to point out that I am probably only one out of a handful of people who can say they shut down a ride at Disney World! How embarrassing!!