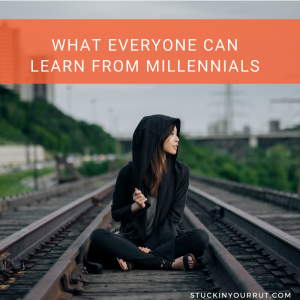 I think that millennials have gotten a bad rap. When you look at the breakdown of when the generation starts I fall within the range. But honestly, it’s so close that you could probably age me out of the group as well. Anyway, you hear so many negative things about millennials. We see things constantly about how lazy they are or how they don’t know how to do anything for themselves and they aren’t hard workers. There is this stigma that millennials have no motivation to accomplish anything. But, that’s not true. In fact, I believe it’s the exact opposite.

The more I start to think about what millennials are accomplishing the more amazed I am by the group as a whole. Yes, you have some millennials that seem to have no motivation to accomplish anything, but I think that has a lot to do with the changes in the parenting styles that happened. And, there are some of those people in every generation. Here are some things I think everyone can learn from millennials.

For years people have focused on getting a good job with benefits. That is what we were told to do. For example, when I was getting ready to graduate from high school I was interested in journalism. The school counselor and some teachers discouraged that idea because the internet was growing and journalism would no longer be needed.

Are you laughing? This idea was put into my head that I might as well not pursue writing as a career because the internet was going to do away with that. Well, fast-forward 16 years (can’t believe it’s been that long!) and my career is writing online. As we know now the internet actually opened up the need for more writers instead of doing away with writing careers. Sometimes I wonder what I would be doing at this point if I had followed my passion from school instead of the advice of others.

Millennials don’t just want a job. They want to pour their time and energy into doing something that they love. Some employers see this as a bad thing, but I think it’s AMAZING! Imagine what kind of incredible things we are going to see happen because there is a generation of people that want to challenge the way of thinking that came before them. They don’t want to settle for just a job. They want to do something where they have a purpose and can make a difference. Why is that a bad thing?

I have done some content writing for the real estate market and it was BIG news that millennials were not buying houses. In fact, this year is the first year that the majority of buyers are expected to be from that generation. People viewed that as millennials not being motivated enough to purchase a home, but when you dig into the research that’s not the case.

It’s not because they are lazy. There are actually several reasons that buying a house didn’t happen as fast for this generation:

The last point is what I want to discuss. Millennials would rather have experiences than things. There are countless stories online about millennials that want to travel the world. And, they can because they are doing freelance work or harnessing the power of the internet to make money online. They don’t care to own tons of possessions because they are too busy out living life.

We all need to make money right? At least enough to survive on. There are entirely too many people that are living for the weekend and dreading Sunday night. Millennials aren’t having it. They don’t want to be stuck at a job they hate to make money and live for the weekend. Instead, they are finding jobs (or creating jobs) that they love.

They are finding ways to use their passion to make money. They are forcing a change to the job market. Instead of 401Ks and benefit packages being the things that they seek when looking for a job they want the freedom to create their own schedule. They want to be able to work from home. They want leaders that allow them to own their position instead of bosses that micromanage. And, because they are doing this they are building lives that they enjoy.

When I started my first real full-time job after high school I can remember during training asking my supervisor “why?”. I didn’t want to just know how to do something, I wanted to know why we did it the way we did. She didn’t have an answer because no one had ever explained it to her either. So, I just accepted that as it was and went on.

Millennials aren’t having any of that. They are challenging the way things used to be. They are thinking for themselves and they aren’t afraid to point out when something doesn’t make sense or there is a better way to do it. Change is not a bad thing or a scary thing to them. They embrace it.

It’s time we all start being a little more like millennials. We need to embrace change, because it’s going to happen anyway. We need to start thinking for ourselves and discovering why we do the things we do and what should be changed. And, we need to find things to do that we love. Instead of constantly making fun of millennials we need to see what they are doing right and learn from it.