Let me start with saying that I love Camping! I have been many times, but I am sad to say that my wife and I have never taken our girls camping. We have three daughters. One eight years old, one 5 years old, and one almost three years old.

We planned a last minute trip and went for one night. We did not have time to plan or organize much of anything, which I love and my wife hates, but we decided we would just do it! We added this night of camping to a two day trip that we already had planned. We were going to the Upper Peninsula in Michigan and if you know Michigan, you know that the U.P. in October is pretty cold.

Getting ready to cross the Mackinac Bridge. It was cold and windy!

The campground was 6 hours from our house and we had taken our time and enjoyed the trip north, so we did not arrive at the campground until about 5:30 and everyone was hungry. When we arrived it was drizzling and the reports said that we could expect rain overnight. We pulled into the campground and we were happy that we had made reservations earlier in the week, because it was full. We immediately noticed something though. Out of the 60 sites, there were maybe 5 other sites that were using tents. Not only did campers dominate the campground, but almost every single campsite was decked out in Halloween decorations. Being in a tent and not knowing that there was a Halloween decoration contest taking place that weekend left us feeling out of place.

We had a beautiful site where you could see Big Bay de Noc of Lake Michigan 50 yards away through the trees. We got out and could feel the wind whipping off the lake and realized that we had definitely come unprepared for camping in the cold with little kids, especially for their first time camping. As you can imagine my wife and I were more than a little scared about how three little girls would do camping out in the wind, rain, and cold for their first camping experience ever. We were worried that none of us would be getting any sleep that night.

Combined with the rain, the wind and the cold almost convinced us to give up the camping and find a hotel. We actually decided that we would just get the fire going to cook our hotdogs and roast some marshmallows so the girls would have that experience. After getting back with the firewood we began working on getting a fire started. As I got the fire going I could sense that my wife Stephanie, was having a change of mind and wanted to stay. I thought to myself that I wanted to be more of a “go with the flow” person and thought it would be good for our family to stick with the camping and tough it out so my Stephanie and I decided that we would stay.

We wanted our girls to see that you can still have fun even if the weather is not perfect and we also wanted to help them develop some toughness. I have to give my wife the credit, I had been leaning more toward getting a hotel, because I was not sure how Stephanie and the girls would handle the cold and rain, but she proved to be the toughest of all of us. 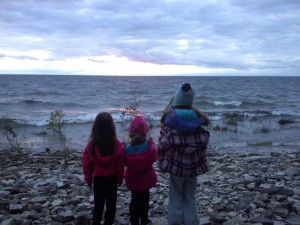 The girls checking out the water view near our campsite. Notice the winter coats and hats!

We had a very large tent to set up, which we did in record time and then while I staked it down, Stephanie took the girls down to the water. It was nice seeing them walk down to the water and hearing the girls’ laughter. I knew we had made the correct choice when I could see how happy Stephanie and the girls were. We had a nice night cooking hot dogs over the fire, making s’mores, and listening to the waves come in. Then we even took a walk and enjoyed the Halloween decorations set up at most of the campsites. We put the girls to bed, but we were also in the tent a half hour later because of the cold.

It rained overnight and woke us up for a little while, but we all went back to sleep. It was also cold, but we all just slept closer to each other and we had a nice night. The next morning we woke up and went to work immediately. We got the girls in the running car to keep them warm and we tore down the tent and campsite within a half hour. We were back on the road and everybody had a good time. I was very happy that we had toughed it out and built a great memory with our girls even when everything did not go right and it would have been easier to give up. Just because it is a short trip, doesn’t mean that it cannot be a memorable trip! The girls all had fun and we look forward to doing a lot more camping trips in the future. We were able to learn a new activity that we like to do as a family, because we were willing to try something new and we did not let the obstacles that came up stop us. If you think you want to try something, stop thinking and start doing!