I think it’s safe to say that pretty much every parent wants to keep their children safe from all harm. We try to teach them not to talk to strangers, not to cross the street, to eat carefully so they don’t choke, wash their hands all the time, and the list could go on for pages.

A few weeks ago our family was at Piers Gorge in Michigan’s Upper Peninsula. My parents were with us and we were hiking along the paths and climbing down rocks to see the rapids on the Menominee River. I kept telling the girls over and over to be careful, hold someone’s hand, stay away from the edge. 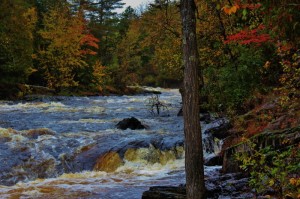 At the largest rapid we got a picture of the girls on a rock and then Dustin continued to climb further out to get a better view (he loves hiking!). Our oldest daughter was playing around one of the rocks and it was making me nervous. I made her move away from the rocks so she would be safe.

After a few minutes she started asking if when we were going to be leaving because she was bored. I realized instantly that I had ruined her fun. She just turned 8 this year and I sometimes forget that she is capable of doing more than her younger sisters.

I explained to Dustin what was going on and asked him to take her with him. So, he helped her climb out further onto the rocks. My parents and I took the two younger girls back up to the path and walked further down the river while Dustin took our oldest hiking along the edge of the river. 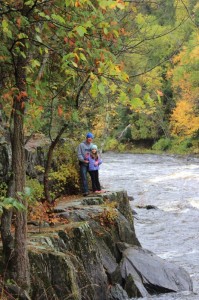 I had instilled fear instead of caution in her. We had a long discussion when we were in the car with her about why we need to be careful around water, especially rapids, but why it’s OK to enjoy them and how much fun the water can be.

This experience has helped me to realize that I try to protect and shelter my girls too much. I need to find that line of doing a great job as a parent of protecting them and keeping them safe, but also allowing them to have fun and be kids. They need to run, jump, and play. They should be able to climb around on huge rocks and fallen trees. They should be able to sit on the curb waiting for a parade to start and go outside and play (in a safe place) without constant adult interruption. 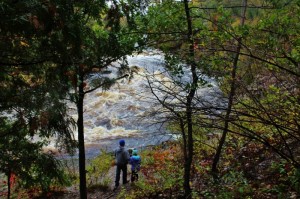 I see now, that by constantly trying to keep them safe from everything, I was in the process of creating girls that were going to be fearful of everything.

And I’m not saying kids should just be free to do whatever they want unsupervised. Children need limits and they need rules, but they also need to be allowed to try things. They need to fall down sometimes. They need to be able give underdogs on the swings and go down the slide backwards and head first. They need to climb trees and catch frogs in the creek.

If we don’t allow our children to take some risks and have some adventures in life I think we will end up with one of the following options:

Last year my daughter (who was 7 at the time) wanted to be in the school talent show. The music teacher was holding “auditions” to make sure that the children actually had a plan of what they wanted to do instead of just winging it. The “auditions” were going to be after school and during the school day we got a call from the office that my daughter didn’t feel well and was slightly warm.

Being the protective mom I rushed right to school and put her in the car to take her home. Once we started to drive down the road and I was talking to her I realized that she wasn’t sick, she was nervous. This is her pattern. When she is overly excited or gets nervous she feels “sick” and can even run a low temp.

Once we got home my husband and I sat down with her while we had lunch and we talked about why she didn’t need to be nervous for the “audition”. We worked on encouraging her and building her confidence and then we took her back to school so she could finish the day. And, you know what? She had a great rest of the day at school, did great at her audition, and ended up in the local paper when the talent show was over. She was so excited and proud! And, she would never had gotten that chance if I would have followed my mommy instinct of keeping her “safe and protected” because she was nervous.

Sometimes the best thing we can do for our children is to help them face their fear and teach them to do so wisely.

« Disney – The Ultimate Stress Buster
Exercise With No Excuses »